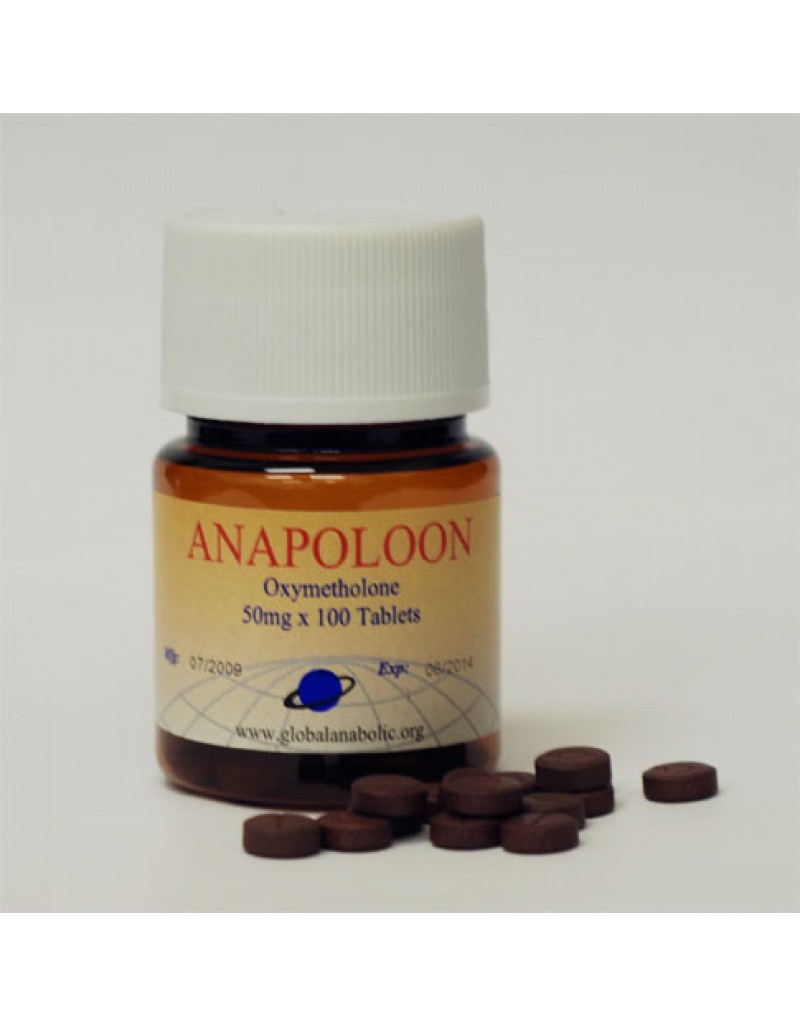 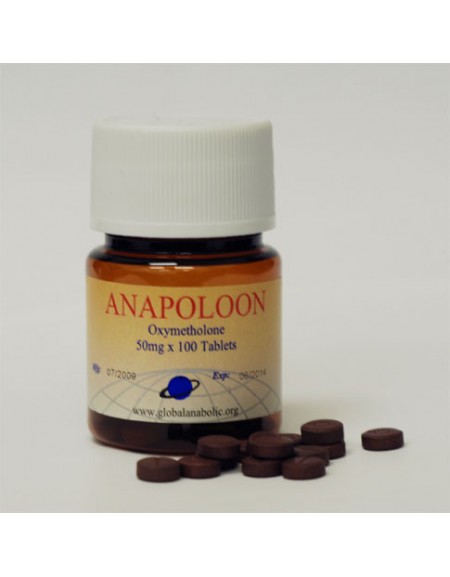 Product Description:
Anapoloon is the strongest and, at the same time the most effective oral steroids. It is extremely high androgenic effect and goes with extremely intense anabolic components. Goods gain in strength and mass can be noticed in a short periods. Body weight increases 4 ¨C 7kg within 2 weeks. Water retention is considerable, so that the muscle diameter quickly increase and the user get a massive appearance within the recorded time. Due to water retention, most of the athletes look smooth and puffy! Anapoloon will causes a quantity gains but not quality gain of muscle. Anapoloon is the most welcomed in the off seasons cycle. Due to the water retention, it helps to lubricate the joints. Power lifters in the higher classes are sold on anapoloon. A strict Diet with the simultaneous intake of Tamoxifen and proviron, can significant reduce water retention and help to increase in solid muscle is possible. Athletes will also feel the pump effect during workout in the exercised muscles. The blood volume in the body is significant elevated causing a higher blood supply to the muscles during work out. Anapoloon increase in red blood cells, allowing the muscle to absorb more oxygen. Muscle thus has a higher endurance and performance level. Athletes can reply on great power and high strength even after several sets. Some bodybuilders report such an enormous and in part painfulpump that theyend their workout after only a few sets or work on another muscle. The often mentioned steroids pump manifests itself to an extreme by the intake of Anapoloon and during workout it gives the athlete a fantastic and satisfying senation. The highly androgenic effect on Anapoloon stimulates the regeneration of the body so that the often feared overtraining is unlikely. The athlete often feels that only hours after a strenuous workout he is ready for more. Although anapoloon is not a steroids used in preparation for a competition, it does help more than any other steroid during dieting to maintain the muscle mass and to allow an intense workout.

Presentation: 50mg tablets are brown round with GA logo imprinted on one side. Sealed in a 100 tablets container.

As for the dosage, opinions differ. The manufacturer of the former Spanish Oxitosona 50 tablets, Syntex Latino, recommends a daily dosage of 0,5 - 2,5 mg per pounds of body weight. A bodybuilder weighing 200 pounds could therefore take up to 500 mg per day which corresponds to 10 tablets. These indications, however, are completely unrealistic, much too high, and could cause severe side effects. A dosage sufficient for any athlete would be 0,5 - 0,8 mg per pound of body weight/day. This corresponds to 1-4 tablets; i.e. 50-200 mg/day. Under no circumstances should an athlete take more than four tablets in any given day. We are of the opinion that a daily intake of three tablets should not be exceeded. Those of you who would like to try Anadrol 50 for the first time should begin with an intake of only one 50 mg tablet. After a few days or even better, after one week, the daily dosage can be increased to two tablets, one tablet each in the morning and evening, taken with meals.A strict diet together with the simultaneous intake of Nolvadex and Proviron, can significantly reduce water retention so that a distinct increase in the solid muscles is possible. By taking Anadrol 50 the athlete experiences an enormous "pump effect" during the workout in the exercised muscles. The blood volume in the body is significantly elevated causing a higher blood supply to the muscles during workout.Athletes who are more advanced or weigh more than 220 pounds can increase the dosage to 150 mg/day in the third week. This dosage, however, should not be taken for periods longer than two to three weeks. Following, the dose should be reduced by one tablet every week. Since Anadrol 50 quickly saturates the receptors, its intake should not exceed six weeks. The dramatic mass build up which often occurs shortly after administration rapidly decreases, so that either the dosage must be increased (which the athlete should avoid due to the considerable side effects) or, even better, another product should be used. Those who take Anadrol 50 for more than 5-6 weeks should be able to gain 20 - 25 pounds. These should be satisfying results and thus encourage the athlete to discontinue using the compound. After discontinuing Anadrol 50, it is important to continue steroid treatment with another compound since, otherwise, a drastic reduction takes place and the user, as is often observed, within a short period looks the same as before the treatment. No other anabolic/androgenic steroid causes such a fast and drastic loss in strength and mass as does Anadrol 50. Athletes should continue their treatment with injectable testosterone such as Sustanon 250 or Testosterone enanthate for several weeks. Bodybuilders often combine Anadrol 50 with Deca-Durabolin or Testosterone to build up strength and mass. A very effective stack which is also favored by professionals consists of Anadrol 50 100 mg+/day, Parabolon 228 mg+/week, and Sustanon 500 mg+/week. This stack quickly improves strength and mass but it is not suitable for and steroid novices. Anadrol 50 is not a steroid for novices and should only be used after the athlete has achieved a certain development or has had experience with various "weaker" compounds. Stories that the elite bodybuilder uses 8-10 or more Anadrol 50 tablets daily belongs to the realm of fairy tales. It is rare that any ambitous competing bodybuilder can do without the support of 50 mg Oxymetholon tablets; however, taking 8, 10 or 12 tablets daily is more than the organism can handle. Anadrol 50 is to be taken seriously and the prevailing bodybuilder mentality "more is better" is out of place.

Anadrol 50 is unfortunately also the most harmful oral steroid. Its intake can cause many considerable side effects. Since it is 17-alpha alkylated it is very liver-toxic. Most users can expect certain pathological changes in their liver values after approximately few week.The compound oxymetholone easily converts into estrogen. This causes signs of feminization (e.g. gynecomastia) and water retention which in turn requires the intake of anti estrogens (e.g. Nolvadex and Proviron) and an increased use of diuretics (e.g. Lasix) before a competition. Bodybuilders who experience a severe steroid acne caused by Anadrol 50 can get this problem under control by using the prescription drug Accutane.Other possible side effects may include headaches, nausea, vomiting, stomach aches, lack of appetite, insomnia, and diarrhea. The athlete can expect a feeling of "general indisposition" with the intake of Anadrol 50 which is completely in contrast to Dianabol which conveys a "sense of well-being". This often creates a paradoxical situation since the athlete continues to become stronger and bulkier while, at the same time, he does not feel well. The increased aggressiveness is caused by the resulting high level of androgen and occurs mostly when large quantities of testosterone are "shot" simultaneously with the Anadrol 50. Anadrol is not a steroid for older athletes since they react more sensitively to possible side effects, and the risk of liver damage and prostate cancer increases. Since the drug is usually taken with a diet rich in calories and fat needed to build up mass, the cholesterol level and the LDL values might increase while the HDL values decrease. The body's own production of testosterone is considerably reduced since Anadrol 50 has an inhibiting effect on the hypothalamus, which in turn completely reduces or stops the release of GnRH (gonadotropin releasing hormone). For this reason the intake of testosterone-stimulating compounds such as HCG and Clomid (see relative characteristics) is absolutely necessary to maintain the hormone production in the testes.

Anadrol 50 is not recommended for women since it causes many and, in part, irreversible virilizing symptoms such as acne, clitorial hypertrophy, deep voice, increased hair growth on the legs, beard growth, missed periods, increased -libido, and hair loss. Anadrol 50 is simply too strong for the female organism and accordingly, it is poorly tolerated. Some national and international competing female athletes, however, do take Anadrol 50 during their "mass building phase" and achieve enormous progress. Women who do not want to give up the distinct performance-enhancing effect of Anadrol 50 but, at the same time, would like to reduce possible side effects caused by androgen, could consider taking half a tablet (25 mg) every two days, combined with a "mild" injectable anabolic steroid such as Primobolan Depot or deca durabolin. Ultimately, the use of Anadrol 50 and its dosage are an expression of the female athlete's personal willingness to take risks. In schools of medicine Anadrol 50 is used in the treatment of bone marrow dis`orders` and anemia with abnormal blood formation.