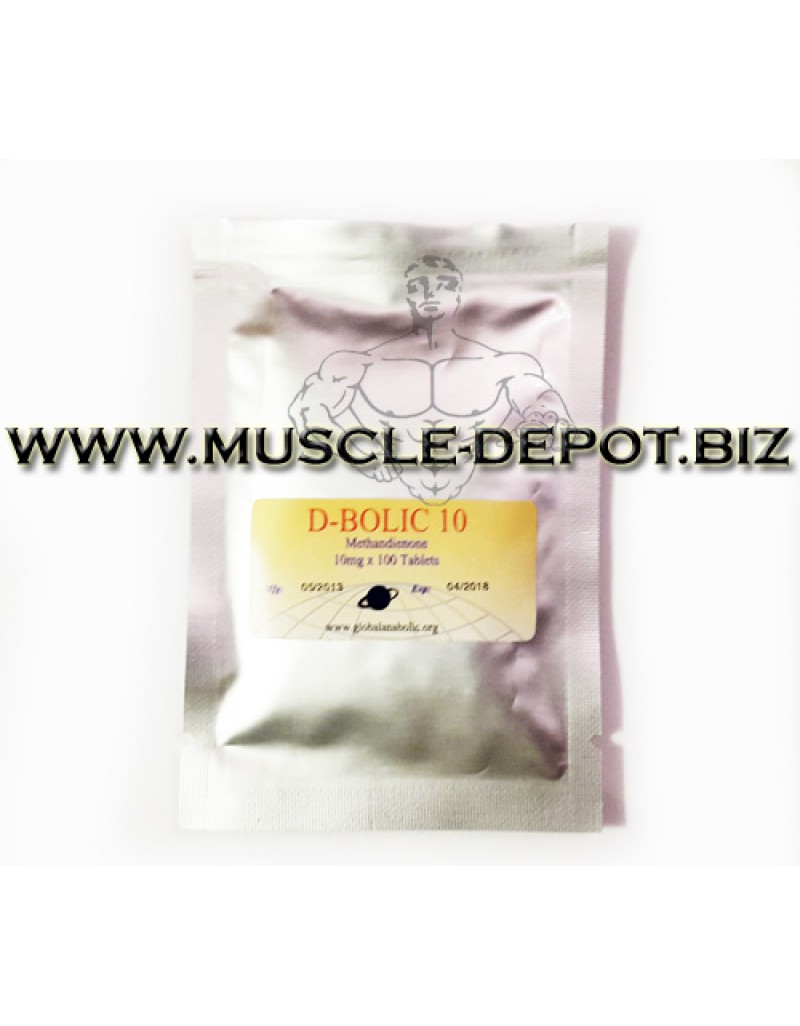 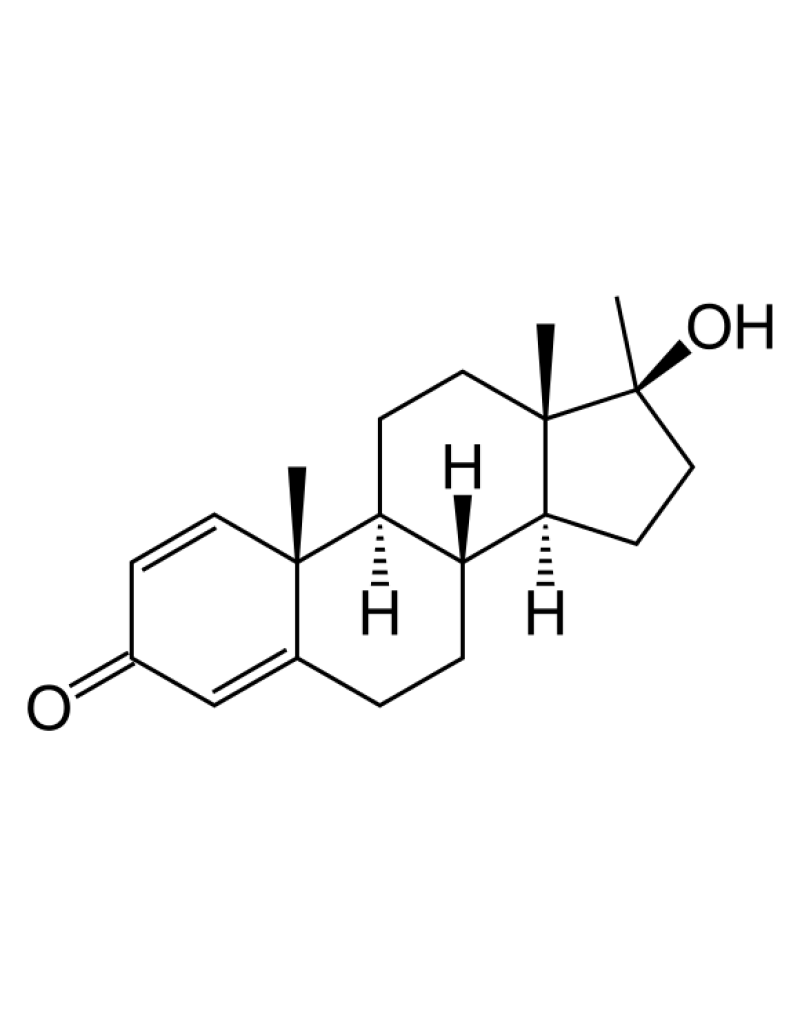 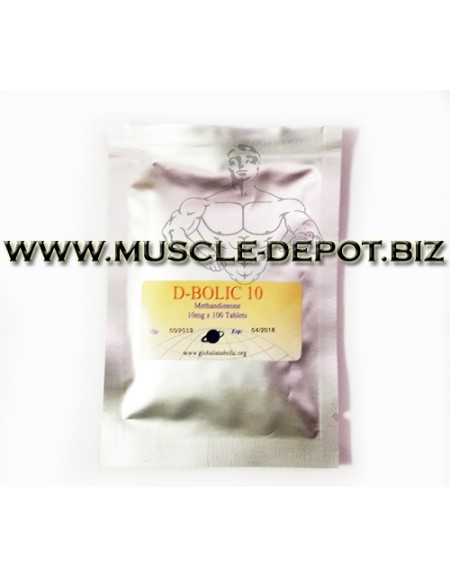 Product Description:
D - Bolic is an orally applicable steroid with a great effect on protein metabolism. Methandienone is a derivative of testosterone and has a very strong anabolic and androgenic properties. It has a great effect on protein metabolism and promotes protein synthesis. This effect manifests itself in by creating a positive nitrogen balance, supporting the builidup of protein and, thus, skeletal muscle mass. Methandienone also induces an improved sense of well-being.

Presentation: 10mg tablets are blue round with GA logo imprinted on one side. Sealed in a 100 tablets container.

Proper dianabol dosage varies from 15 to 40 mg, the most commonly used is 40 mg every day. For novices 20 mg is sufficient dosage. for second cycle it should be increased to 30-40 mg. To improve results during long cycle its a good idea to add 200-400 mg of Deca Durabolin or 200-600 mg of Primobolan after 8 weeks rather than keep or increase existing dianabol dosage, which should be stable during the cycle. Testosterone should be added only by advanced sportsmen when dianabol standalone or deca/dianabol combo cease to produce sufficient results.

Actually, dianabol stabilizes androgen receptor very badly. Despite of this it stimulates protein synthesis very well somehow. The nature of this process is not discovered yet, the scientists suggest that it affect some unknown receptors on the surface of cell, which promotes protein synthesis. substantial amount of steroid remains inactive in the body.

Methandrostenolone largely enhances glycogenolysis (recovery of glycogen, exhausted during the workout). Also it reduces activity of cortisol, and thus helps to avoid the destruction of muscle fibers after the training. Contrary to popular belief, methandrostenolone is not very well aromatized, it's molecule is quite similar to boldenone. However, it aromatizes not just to estradiol, but to a much more powerful 17-methyl-estradiol. So still a large part of gains consist of water which tends to leave the body at the end of cycle. Dosages of 25-30 mg/ED, however, doe not produce substantial water retention.

Methandrostenolone raises the level of dopamine in the body that helps to get rid of excessing body fat. Although it's not well-studied scientifically, methandrostenolone certainly might be used in some "fat burning" cycles, for example, by combining it with non-aromatizing boldenone, trenbolone or Oxandrolone.

Dosages between 50 to 100 mg / day are reasonable only if dianabol is used standalone, however stacking (even 25-50 mg/ED) should provide much better results than simple increasing of dosage.

Dianabol has half-life period of only 3.5-4.5 hours, so it's better to split daily dosage on 5-6 equal parts (or at least 2-3) and take it at regular intervals throughout the day preferably during the meal.

Methandrostenolone is best combined with drugs that stabilize the androgen receptor well: testosterone, trenbolone, nandrolone, methenolone, oxandrolone. You can try a combination of methandrostenolone with boldenone as well. It's better to avoid combining of methandienone with oxymetholone or fluoxymesterone. The reason is high load on the liver even despite this should produce very quick muscle gains (unfortunately, not lean muscle gains - a large part in this case will be water).

In general you need to combine fast acting dianabol/anadrol (oxymetholone) with long living substances like deca or maybe boldenone along with some kind of testosterones.

A good startup stack is deca (deca durabolin, nandrolone decanoate) 400 mg/week + dianabol (danabol, naposim, methandienone) 40-50 mg/day. Length of cycle is 8 weeks. Don't forget about anti-estrogen from the week 3 and 1 week after the cycle - tamoxifen or clomid (1 tab ED). For this cycle we advice you also using LIV-52 for liver protection.

Using anti-estrogen for this cycle is important. Also, it restores natural test production. Using liv-52 is not absolutely necessary but makes this cycle completely safe.

When doing it as a kick-start of the cycle dianabol is used standalone for the first 3-6 weeks in a range between 20 and 100 mg/ED. The most common option, however, is 40-50 mg for 4 weeks then athlete cease dianabol and switch to long-acting injectable substances.

A cycle for advanced users who aim more on strength is dianabol 40 mg/Ed plus Anavar (oxandrolone) 30-40 mg/ED or Winstrol 50 mg/ ED.

Dianabol (methandienone) is a bulking, but not pre-competition drug due to substantial water retention and high aromatization. In case athlete decides to go with it in the preparation for a contest he should actively use anti-estrogen like proviron or tamoxifen / clomiphen and combine dianabol with other cutting or non-bulking drugs like Winstrol (injectable - to protect liver), parabolan, oxandrolone (anavar) or Masteron.

It could be also used as a bridge between cycles at a dosage of 10 mg/every day along with aggressive usage of substances, which recover natural testosterone production such as tamoxifen, clomiphen and, probably HCG (pregnyl) right after the cycle. Such dosage will not suppress your natural hormone production at all but maintain it until your glands are recovering after the cycle.

Side effects and PCT (Post Cycle Therapy) with dianabol

Side effects rarely occur at a dosages up to 20 mg/ED. Dosages over 40 mg/ED (sometimes even much smaller dosages) produces negative effects on the liver values, which are eliminated when usage of the substance is discontinued. During usage it is highly advisable to use liver-protectors such as Liv-52 or Essentiale Forte. Due to these reasons, cycle should be limited to 6-8 weeks and then athlete should make a rest for the same period, although studies have not found any serious problems even after 14 weeks of usage.

Despite the fact that methandrostenolone is transformed into the 17-methyl-estradiol, it suppresses the production of natural testosterone to a much less degree than, let's say, nandrolone. Single use of even 100 mg (!) of the drug in the period between 7 am and 12 pm resulted in the suppression of endogenous testosterone production only for 30-40 percent. However, prolonged use of high doses of the drug (6-8 weeks), not limited by morning hours only, results, nevertheless, in almost complete inhibition of
production of testosterone by the body.

High blood pressure and a faster heartbeat s are also possible, both of these are eliminated by intake of antihypertensive drugs. In theory, dianabol can accelerate hair loss, although this is not proven scientifically. The cure is finasteride (finpecia, proscar)

But in most cases athlete needs during the cycle 20 mg of tamoxifen or 50 mg clomiphene daily. With high dianabol dosages proviron might be a good addition. After the cycle tamoxifen/ clomiphen dosage should be tripled at the first day and duplicated for the other two weeks (in case of lower dianabol dosages, 2nd week after the cycle could be used regular dosage)

Recent years certain manufacturers attempt to produce injectable oil methandienone ester. This is quite possible, however, we should note that synthesis of such product might be too expensive and the most important thing is that such molecule becomes too stable due to methyl group in 17-α, which prevents steroid from activation. As a result most of injectable methandienone might remain inactive. And what happens if we remove methyl group from this position and put another ether chain instead? It will become boldenone! So it's better either to use oral dianabol as it is or injectable boldenone without playing any games with pre-mature substances.